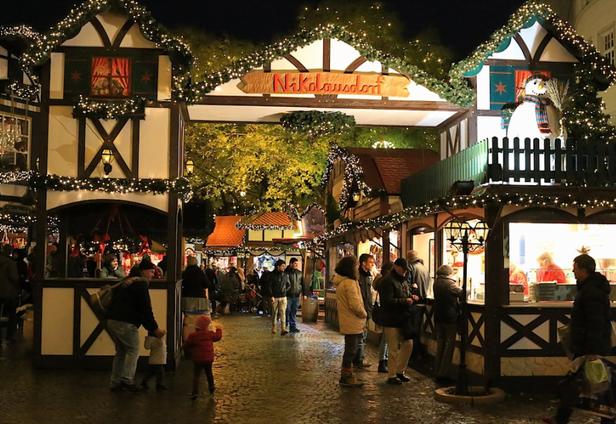 There is another town that answers letters to Santa Claus: Nikolausdorf (Nicholas village) in Lower Saxony in Northern Germany. With a population that barely brushes 1,000, it has its work cut out for it to answer nearly 8,000 letters each year.

When I lived in Germany many years ago, I heard about a man there by the name of Hubert Weddehage who, as a young employee in the city’s finance department, had taken on the campaign to answer all of the letters to St. Nick (Santa Claus) that arrived there each year (pictured, above, in his St. Nick costume answering letters). At that time, he had been leading the charge for about seven years, he told me, and the town received perhaps 3,000 letters. I did an interview back then, which I promptly forgot about … until I found the notes again this year. Did that man who made thousands of children happy still exist more than three decades later?

Letters to Santa copy of letter from AnaA few Internet searches later and I was shocked to find the name Hubert Weddehage pop up. And he was still leading the letter-answering campaign! So I dropped him an email. Yes, came the answer from Weddehage, now running his own accounting business, 45 years in total he’s been doing this, and 2015 was in fact the 50th anniversary of the official start of the undertaking to answer letters coming to St. Nick in Nikolausdorf.

And some things have not changed: Weddehage told HITravelTales.com that letters in fact come still from all over the world from France to China to Poland. And the town’s residents continue to pull together, starting 3-4 weeks before Christmas, sitting down as a group of as many as 22 people at a time, five times a week, for two hours or more. All to not disappoint the children.

“We only wanted to make the children happy,” he said, in German, in 1983.
But a few things have indeed changed, aside from an increase in letters: These days, Weddehage said, kids want technology, and they often cut out ads for the laptops or tablets or smartphones they want and put them in the letter so Santa doesn’t get them the wrong thing. Of course, these days, they don’t get letters from East Germany like they used to since the wall came down in 1986.

A village of 1,000 can’t manage on its own. The Deutsche Post (German Postal Service) steps in, donating stamps and printing costs. It even creates a special Nikolausdorf postmark each year with an appropriate image, with the 2015 version noting it is the 50th anniversary. The campaign is on the postal service’s website, albeit only in German . St. Nick’s address: An den Nikolaus, 49681 Nikolausdorf, Germany.

How did all this begin? In the early ‘60s, a few letters would straggle into town, no stamps, no postmarks. Did the post office really want to send them back to these kids marked “undeliverable?” That would seem awfully Grinch-ish, Weddehage told me several decades ago. So the postal carriers started answering them on their own. Then, in 1965, a regional newspaper wrote a story about it all. And that started the onslaught. A schoolteacher by the name of Johann Kabella took over the “mountain of letters” that started arriving, and Weddehage stepped in in 1970. It’s a labor of love, for sure, one that lasts nearly a month.
“It starts out as great fun,” he said long ago, “but then it does get a little tiresome.”