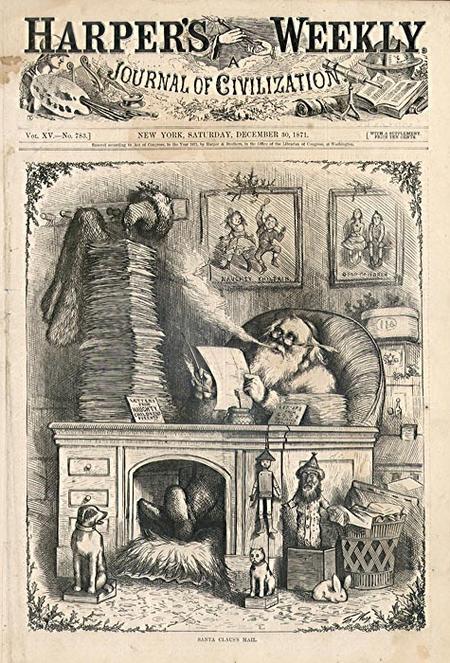 Santa Claus is a mythical person, someone who does not really exist, even though many young children believe in him. So when the world’s children write letters to Santa, who is responsible for answering those letters and encouraging children to continue believing?

FIVE HISTORICAL FACTS ABOUT THOSE LETTERS FROM SANTA.

Santa used to send letters, not receive them. In the middle 1800’s parents used the “letter from Santa” as a tool to counsel kids on their behavior. For example, Fanny Longfellow (wife of poet Henry Wadsworth Longfellow) wrote letters to her children every season, weighing in on their actions over the previous year (“I am sorry I sometimes hear you are not so kind to your little brother as I wish you were,” she wrote to her son Charley on Christmas Eve 1851).

Originally, kids didn’t mail their letters to Santa. Kids in the U.S. would leave them by the fireplace, where they were believed to turn into smoke and go up to Santa. Scottish children would speed up the process by sticking their heads up the chimney and crying out their Christmas wishes. In Latin America, kids attached their missives to balloons, watching as their letters drifted into the sky.

It used to be illegal to answer them. Santa’s mail used to go to the Dead Letter Office, along with any other letters addressed to mythical or undeliverable addresses. Though many individuals offered to answer Santa’s letters, they were technically not allowed to, since opening someone else’s letters, even Dead Letters, was against the law. Things changed in 1913, when the Postmaster General made a permanent exception to the rules, allowing approved individuals and organizations to answer Santa’s mail.

A cartoon helped kickstart the popularity of writing to Santa. If one work can be credited with helping kickstart the practice of sending letters to Santa Claus, it’s Thomas Nast’s illustration published in the December 1871 issue of Harper’s Weekly. The image shows Santa seated at his desk and processing his mail, sorting items into stacks labeled “Letters from Naughty Children’s Parents” and “Letters from Good Children’s Parents.” Reports of Santa letters ending up at local post offices shot up the year after Nast’s illustration appeared.

Newspapers used to answer them. Before the Post Office Department changed its rules to allow the release of Santa letters, local newspapers encouraged children to mail letters to them directly. In 1901, the Monroe City Democrat in Monroe City, Missouri, offered “two premiums” to the best letter. In 1922, the Daily Ardmoreite, in Ardmore, Oklahoma, offered prizes to the three best letters. The winning missives were published, often with the children’s addresses and personal information included. This practice shifted as the post office took greater control over the processing of Santa letters.
Source: http://mentalfloss.com/article/72310/10-historical-facts-about-santa-letters

The question is, of course, who acts on Santa’s behalf - who answers children’s letters and pretends to be Santa. In more recent years letters from Santa have been handled in several ways.